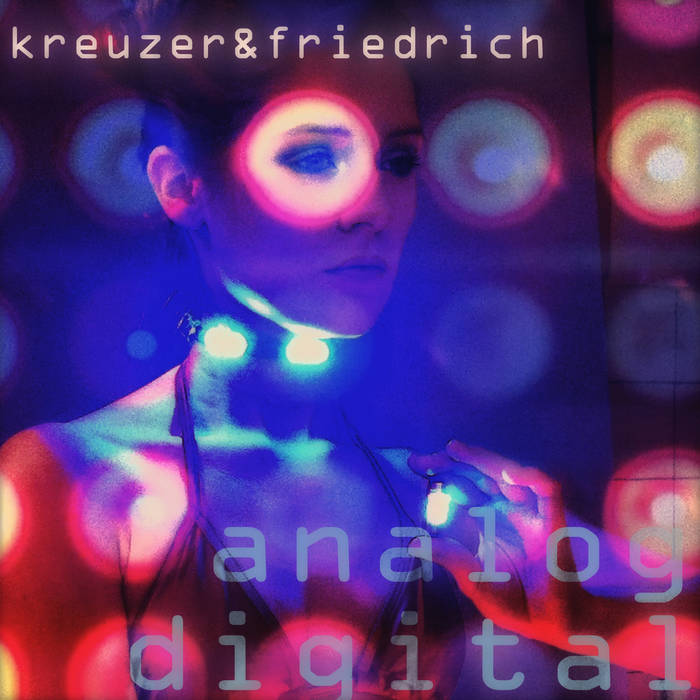 It was only a question of time until the two Offenbacher musicians Jörg Friedrich and Stefan Kreuzer would meet and produce an album together.
The clear digital Friedrich/Pearlcoder-soundcosmos encounters
Kreuzer’s playful downbeat style.
The album „Analog – Digital“ is the result of their common passion for both exciting and relaxing compositions. The tracks conjure a warm magical feeling into the room, without being arbitrary. Each track tells a story in its own way, which is not always straightforward, but holds many surprises: from heavenly violin, special sound gimmicks to dirty electric guitar.
Special guests on this album are the bass player James Lindemann and the producer Maximilian Lopp. Lindemann developed in studio sessions soundscapes and overdubs, Lopp contributed a special remix.

Kreuzer:
As a DJ, Stefan X is an inherent part of the German and international chillout scene and played as resident in the Frankfurt Cocoonclub "Bed Restaurant Silk" from the first till the last day. At the very new and stylish bar "Sullivan" in Frankfurt Stefan plays the warm up for clubbers on Saturday evenings.
He places great emphasis on the use of vinyl records, because these correspond most to his understanding of DJ-ing and sound performance.
His innovative selection and mixing makes his sound distinctive and fresh.

Friedrich:
Pearlcoder Jörg Friedrich, who has just released the EP “Rising High” with the US Singer Shenisa Lavon , performs genial sounds and electronic music in all of its colours. His range of music includes all electronic variations of Ambient, Chillout, Trip Hop, and House.
Since the early days of techno music he has produced countless tracks and compilations. With Pearlcoder he has been an inherent part of the electronic music scene for more than ten years.

James Lindemann is an exceptional bass player, who brings a remarkable sound colour into three tracks of the album.
Lindemann and Kreuzer have been playing booked or spontaneous gigs at festivals, art exhibitions and in bars for many years. Here the DJ is accompanied by the bass player who blends into the music through improvied jamming.
In recent years James has played with famous artists from very different genres, from Rock ´n´ Roll with Bill Haley´s Comets or the legendary Elvis guitarist Scotty Moore, to House and Electronic with Harold Todd (Lenny Kravitz) or Slop Shop from Frankfurt.
He is currently working on a new project with the saxophonist Malcolm (Molly) Duncan of the Average White Band.

Blackfish Productions
Not by chance are Kreuzer & Friedrich releasing their album with the producer and label owner from Frankfurt, Maximilian Lopp. They have known each other from many musical connections, Stefan X selected Blackfish’s track „Unending“ for his mix-compilation „Im:pulse“, released in 2001, and both were often guests at Kreuzer’s chillout-open-air „Augen- und Ohrenbad“ as live acts and DJs.
The label was founded 2006 by Maximilian Lopp and specializes in downtempo releases with artists from all over the world. Blackfish Productions also released exclusive remixes from, for example, Motorcitysoul, Diesler and Gabriel Le Mar. The first label compilation „Moving Pattern“ was released 2008 on CD too, and his „Rheintal Chillout“ series Part 3 will be released as download within a short time.

Blackfish Productions is a Music Label from Frankfurt and was founded in 2006. The main focus for BFP is electronic music, but generally Blackfish Productions stands for individual passionate music that has a lasting effect, regardless of any genre - we place great emphasis on the artistic touch. ... more

Bandcamp Daily  your guide to the world of Bandcamp

Khruangbin and Greg Foat stop by with their amazing new LPs.